Campaign: Passacantilli Will Hire Neighborhood Liaisons from Each Community 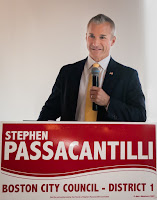 BOSTON – Stephen Passacantilli, candidate for Boston City Council - District 1, has announced that he will hire a neighborhood liaison for each community in the district if elected to the City Council.  Passacantilli is a North End civic leader, Boston Public Schools parent, and former staffer to City Councilor Sal LaMattina.

Passacantilli said, "As former constituent services director for Councilor LaMattina and past president of my local neighborhood council, I know how important it is to have accessible representation in the community and at City Hall.  If elected to the City Council, I will hire a neighborhood-specific liaison for Charlestown, for East Boston, and for the North

End.  Residents deserve to know their City Councilor and their staff, and must always be able to get an answer on issues – big or small – in a timely manner.  I will always prioritize responsive and effective constituent services."

Last month, Passacantilli showed this commitment by becoming the only candidate to open campaign offices in each of the district's three neighborhoods.

Many know Passacantilli from his years of public service across Boston. He is a lifelong resident of the North End where he has been deeply involved as past president of his local civic association and through local charities and community organizations like North End Against Drugs (NEAD) and the North End Beautification Committee. Passacantilli is also an active Boston Public Schools parent and serves on the board of the Gavin Foundation.

Passacantilli and his wife, Renee, are raising their two children, Grace and Evan, just around the corner where he grew up in the North End.

Fr. John Nazzaro, Executive Director of the Salesian Boys & Girls Club, has announced that he will be stepping down as Executive Director to hand the administration over to a new, younger, energetic Director who will continue the leadership of our Salesian Club.

Fr. John will remain as Director of Mission of the Salesian Boys & Girls Club, a position he is very excited about. He feels he will be able to impact more young people without the administrative responsibilities of Executive Director.

The Director of Mission position is a more pastoral position, ensuring the Salesian Spirit of St. John Bosco the Apostle of Youth will be present at our club for years to come.

Fr. John said when he first professed as a Salesian of St. John Bosco, he was asked what would be his dream job. Without hesitation, Fr. John said, “To work at the Salesian Boys & Girls Club.” “I want everyone to know who has been so great in supporting our kids that my new responsibilities are that dream job come true.”

The Director of Mission will collaborate with the Executive Director in overseeing faith formation, mission identity, and formation of the Salesian educational approach.

Fr. John mentioned that this is the priority in all Salesian houses throughout the Congregation. Fr. John will also help the new Executive Director in the transition.

Our Provincial Fr. Tim Zak has increased the number of Salesians from three to five because the Salesian presence is here to stay and is as alive as ever in East Boston.

The Salesian Boys & Girls Club staff has been fantastic over the years and the majority of the staff are former club kids. “Our club is entrusted to great people who I love very much,” Fr. John said. He continued to express his admiration for all the staff over the years and sees great things in the future for the Salesian Boys & Girls Club. With this new position as Director of Mission,

Fr. John will have more time to attend to the Spiritual and Educational Salesian Philosophy as well as promoting a Christian culture with the priority of a safe place for young people.

Fr. John will still be involved in promoting the club with fundraisers and development. “A lot of the donors who have been so supportive in the past are my friends and that friendship must continue to help our youth have a great future … East Boston is my home and I count my blessings every day I get up and hear the sounds of Eastie on Bennington Street.” 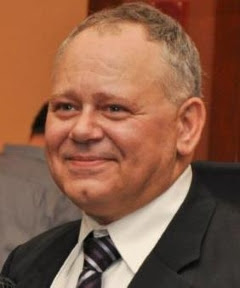 EAST BOSTON – The Kiwanis Club of East Boston will honor club member and long-time East Boston businessman, Clark J. Moulaison Jr., as the “Kiwanian of the Year” for 2017 with a special celebration on Friday, Sept. 22 at Spinelli’s Function Facility in Day Square, East Boston.

Mr. Moulaison is currently a member of the Kiwanis Club board of directors, a past club president from 2013-15, and a member of numerous community service project committees, such as the Bicycle Safety Rodeo, the Belle Isle Marsh Cleanup, the EBARC Holiday Celebration and the K-Trust Scholarship committees.

He is the owner and proprietor of Carmella’s Market (formerly the Gloria Food Store) on Cottage Street in East Boston and operated a number of other businesses in East Boston and Chelsea, including the former American Ice Cream and Sandwich Shoppe on Sumner Street. He is also the former executive director of the East Boston Main Streets Program.

Club membership is also publishing a commemorative souvenir program and advertising booklet for this special occasion. The booklet will be distributed at the dinner and throughout the East Boston community. Ads range from $75 to $250, and can be reserved by contacting Ad Book Chairperson: Marisa DiPietro at 617-650-3442 or mdipietro@ebsoc.org.The ad deadline is Wednesday, August 30.

The Kiwanis Club of East Boston is an organization of volunteers dedicated to changing the world one child and one community at a time through community service.
Photo cutline:

LOCATION - The Noddle Island Community Room located on the first floor of the Logan Airport Rental Car Center situated at the end of Porter Street. Free event parking in front of the building and in the Porter Street parking lot adjacent to the building.
Posted by Frank Conte at 5:10 PM 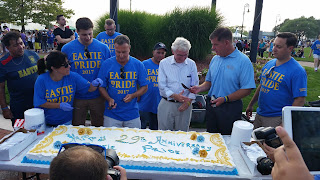 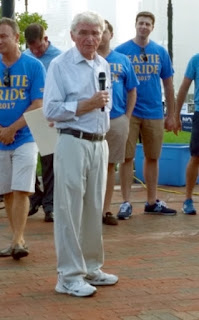 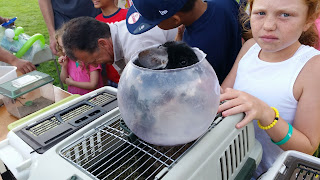 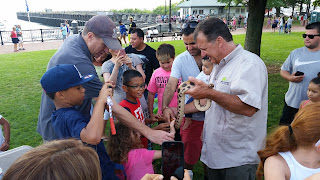 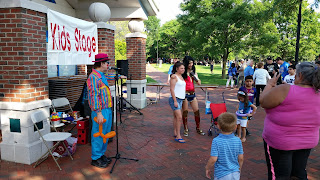 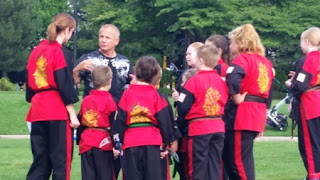 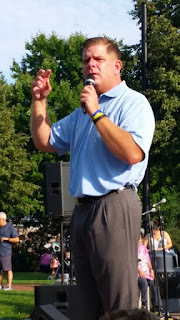 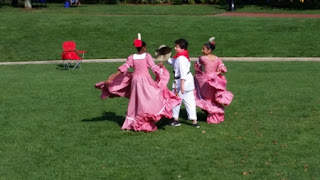 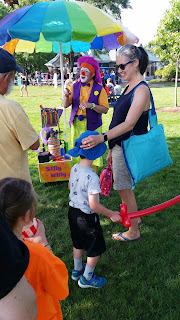 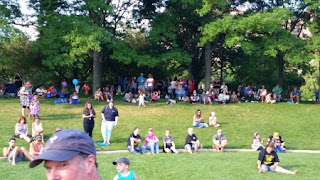 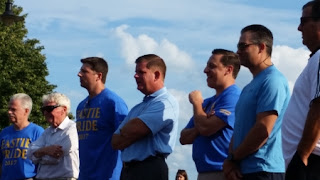 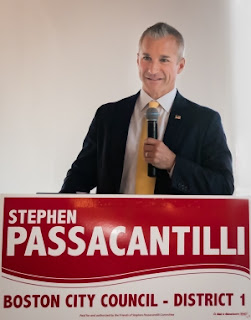 BOSTON – Stephen Passacantilli's campaign for Boston City Council District 1 has announced a major milestone.  This past week, the campaign knocked on their 8,000th door and leads all other campaigns in social media engagement with over 1,300 Facebook followers.

Passacantilli said, "I am so proud of the strong grassroots campaign we are building.  We've been out knocking on doors and calling voters in East Boston, Charlestown, and the North End, and the response has been incredible.  As past head of my local neighborhood council, I know how important it is to hear directly from residents about the issues that matter to them.  That's why we're so focused on going directly to residents to discuss our platform and hear their concerns.  As a lifelong Bostonian with kids in the Boston Public Schools, I'll bring a unique perspective and experience to the Boston City Council.  Residents of District 1 deserve a City Councilor who will take the lead on issues like public safety, education, addiction and recovery, and development.  On the City Council, I will always put you first."

Just last month, Passacantilli became the only candidate to open campaign offices in each of the district's three neighborhoods.

Many know Passacantilli from his years of public service across Boston. He is a lifelong resident of the North End where he has been deeply involved as past president of his local civic association and through local charities and community organizations like North End Against Drugs (NEAD) and the North End Beautification Committee. Passacantilli is also an active Boston Public Schools parent and serves on the board of the Gavin Foundation. 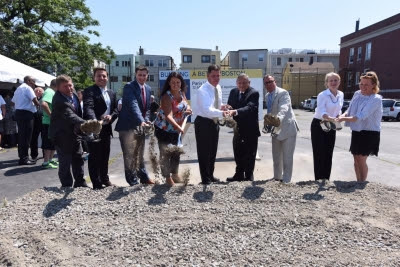 The new apartment building will be located on the former Salesian Boys Club site on Paris Street in the heart of East Boston.

"High quality, affordable housing for working families is the key to opportunity. Creating equitable housing like Paris Village preserves the rich character of Boston's neighborhoods," said Mayor Walsh. "I want to thank our partners for their work to make these homes possible. These are the 2- and 3- bedroom homes working families in Eastie have been calling for, and I'm proud we are continuing Boston's drive to make sure all families can live and work in the City of Boston."

Paris Village is located in one of Boston's fastest growing neighborhoods, near restaurants and a variety of arts, cultural and outdoor amenities and activities. The development will feature 32 new transit-oriented apartments located close to the MBTA blue line, downtown Boston and Logan International Airport.

All of the new apartments will be rented to individuals who are earning at or below 60 percent of the area median income (AMI), with four of the families earning 30 percent of AMI or below.

"As we see so much change in East Boston it is important that we create and preserve affordable family housing for all of the hard working residents of East Boston," said Albert Caldarelli, President and Executive Director of the East Boston CDC. "I am grateful that the Mayor Walsh is so committed to that goal. Without that strong leadership a wonderful development like this would not be possible."

When complete, Paris Village will include 22 two-bedroom and 11 three-bedroom family units, an elevator for accessibility, central air, on-site laundry facilities, a large community space for programming for residents on the ground floor, a rear courtyard and playground with a play structure for children. Construction of theParis Village apartments willgenerate approximately 250 new construction jobs.

"As a long-time resident and tenant of East Boston CDC I am grateful for help we've received from City of Boston. Because of your assistance me and my family have the opportunity to reside in a nice apartment," said East Boston resident Blanca Ayala. "I am also grateful that I was invited to sit on the Board of Directors of EBCDC, Inc. As a Board Member, I have the opportunity to have a say in all of the decisions that affect my tenancy and the close to 1,000 other tenants in our buildings. In my role I also have a chance to work with the CDC and the Mayor of Boston to implement all of the housing initiatives the City supports."

In accordance with the City of Boston's Green Affordable Housing Program, Paris Village will utilize high efficiency heating and cooling systems fixtures as well as Energy Star rated appliances. The development will employ environmentally friendly design features throughout and earn the distinction of being LEED-Homes "Silver" certified by the U.S. Green Building Council. The development will also meet the U.S. Environmental Protection Agency's Energy Star standards.

Paris Village has been made possible in part by a contribution of almost $2 million from the City of Boston, as well as $2.1 million from the State's Department of Housing and Community Development (DHCD) and the Affordable Housing Trust.

Today's groundbreaking builds on the recent release of Housing a Changing City: Boston 2030; Boston's latest quarterly housing report, which highlights gains in stabilizing the housing market, accommodating housing growth, improving housing accessibility and increasing affordability. Since 2014, the implementation of the City's housing plan, 13,551 new units of housing have been created. With an additional 8,412 units currently under construction, the City has secured housing for an estimated 25,000 residents, making significant progress in meeting Boston's rapid population growth.