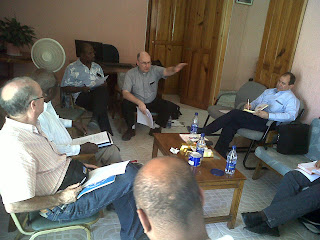 Fr. Mark Hyde traveled to Port-au-Prince today for a planning meeting with the SDB provincial councils Haiti and the Antilles and the FMAs;

Fr. Mark visited Fr. Attilio Stra in the hospital in Santo Domingo. A photo of them with Fr. Pichardo and the Haitian brother who has accompanied Fr. Stra is attached.

Gianluca Antonelli, executive director of International Volunteers for Development (VIS), has offered a part of the financial and technical support for an osmosis water purifying system with capacity to filter up to 7,000 liters of salty water per day. The technical support offered also includes a permanent internet connection via satellite by the provider Signis.

VIS has had a photographer, Beatrice Giorgi, in Port-au-Prince for several days. Several of her photos have already appeared through ANS (the Salesians news agency at HQ in Rome). 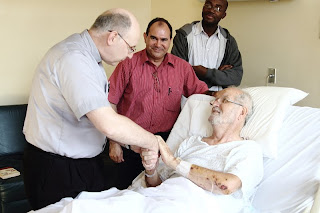 Unfortunately, the shots that do have captions are in Italian. They include several shots of the refugee camp set up at the Salesian school of Carrefour-Thorland; boys with report cards; Fr. Pierre Lephene, including one where he is “dissuading street kids from looting the school”; and removing rubble by hand.

Channel 12’s video: Since Wednesday afternoon (January 20), the alumni and parents of Don Bosco Prep have contributed nearly $15,000 to the Salesian relief efforts in Haiti. The school has received countless expressions of sympathy for the Salesians’ and their students’ losses in Haiti and. The alumni want the Salesians and the people of Haiti to know that they are in their prayers.

Salesian Missions logistics personnel have received confirmation that the first three containers from Cross International are ready to be shipped. The port of arrival is yet to be determined, as the port of Barahona is not a designated international seaport.

After Salesian Missions communicated with the UN Logistics Clusters, they confirmed the installation of a UN General Coordination Center in Barahona with distribution center in Jimani. It is probable that Fr. Mark will extend his stay in Santo Domingo for a few more days. In light of this, a local coordination meeting is being worked on to use UN transportation means as part of Salesian relief efforts.

A bill has passed Congress to allow donations made to a U.S. charitable organization, such as Salesian Missions, for Haiti between January 12 and February 28 to be taken as tax deductions for 2009. The President is expected to sign the bill into law.

Germany’s Misereor plans to send two architects to Port-au-Prince next month.
Salesian Missions’ Web page (www.salesiansmissions.org) has been updated to include news and photos from Haiti and press releases that are readily accessible. News updates are posted daily at the New Rochelle Province Web site (www.salesians.org).
Some other video links:

NBC-MSNBC| “Cite Soleil's best and brightest buried in mission school” (Jan. 21) – appeared on MSNBC homepage (They filmed at ENAM – great piece. We are hoping the network will pick this up as a national feature).


CNN | “Hatians lean on their faith” (Jan. 17) - Look for the specific video (They show the first Sunday Mass at St. Jean Bosco church)

And a clarification: ENAM housed not only the main kitchen for the Fr. Bohnen Mini Schools but also their administrative offices. All that was wiped out.
Posted by Frank Conte at 6:31 AM