Eastboston.com: Candidate Kennedy Calls for Transparency in the Selection of Judges and Operation of Governor's Council

Democrat is seeking 6th District seat.
Posted by Frank Conte at 9:50 AM 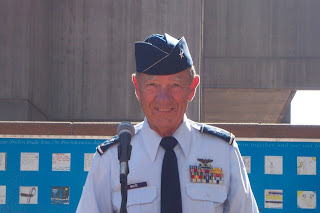 This coming Saturday local veterans and the East Boston community will honor the late Brig. General John F. White at a ceremony at 9 a.m. in Maverick Square. An honor guard from East Boston High School will be in attendance. City Councilor Sal Lamattina will speak and the pastor from the Logan Airport Chapel will offer an invocation. The ITAM on Meridian Street will be hosting a reception.
(The following was based on material submitted by John White's son, Stephen).
John F. White was a lifetime resident of East Boston. He owned and operated White's News which employed many of the neighborhood's youth including current city councilor Sal LaMattina.
Each year, White organized and officiated at the Memorial Day Services at East Boston’s Central Square He was Past President of the East Boston Little League Association; a Member of the East Boston Chamber of Commerce; The Grand Marshall of East Boston’s Columbus Day Parade in 1980. He was an active member of the East Boston Athletic Board and advocate for the Junior ROTC at the Umana School here in East Boston. For 25 years, he was the Grand Marshall and Master of Ceremonies for the City of Boston’s City Hall Fourth of July Parade.

His Military accomplishments and associations began when he enlisted in 1944 in the U.S. Army Air Forces, being deployed with the Eight Air Force in Europe as a B-17 Bombardier. From there he joined the Massachusetts Air National Guard’s 102nd Fighter Group at Logan Airport, Commanding its Supply Squadron at the time of his retirement.

He also served city government as a special assistant to the Commissioner of Veteran Affairs. For the Commonwealth of Massachusetts he was Chairman of the Soldiers Homes in Chelsea and Holyoke.

White graduated from the University of Massachusetts with a four year degree in 1992 and made himself available as a substitute teacher at the Umana Middle School and the East Boston High School.
As the United States Air force Academy Liaison Officer for Massachusetts, he encouraged and recruited East Bostonians as viable candidates to enter the academy to become Officers in the United States Air Force.

The following organizations are just a few of the many involvements he dedicated his life to be a part of:

John as a family man, an athlete; a dedicated military man; a son of East Boston who always was willing to pitch in to help his Community.

Should you have had the occasion to call his home and he was not there, you would have heard his voice mail say the following: “Hi, I am not available to take your call right now, I am out enjoying Life!!!!!!

And indeed he did!
Posted by Frank Conte at 5:25 PM

East Boston Main Streets cordially invites you to its Fall Networking Breakfast on Thursday October 14, 2010 from 7:30 am to 9:00 am at Spinelli's, 282 Bennington Street. The guest speaker will be Boston Police Commissioner Edward Davis. The event is sponsored by East Boston Savings Bank. Tickets are priced at $20.00 per person or $175.00 for a table of 10. This event usually sells out quickly, so call 617-561-1044 or email ebmainstreets@verizon.net now!
Posted by Frank Conte at 6:52 PM