(East Boston, January 22, 2016) Registered Democrats in East Boston will be holding a caucus at the Mario Umana Academy on February 27, 2016 at 10:00am to elect eighteen (18) delegates and three (3) alternates to the 2016 Massachusetts Democratic Convention, where Democrats from across Massachusetts will gather to adopt a new Action Agenda.

The Convention will be held on Saturday, June 4th at the Tsongas Arena in Lowell.

“This is going to be an exciting year as we Massachusetts Democrats work on the presidential election, both here in Massachusetts and across the country,” commented Democratic National Committee Woman, Kate Donaghue. “In addition to the normal proceedings, the June convention is going to focus on training in party building, electoral techniques and issue-based organizing.”

The caucus is open to all registered Democrats in East Boston, and the Democratic Committee welcomes participants. Delegates will be divided equally between men and women, and all ballots will be written and secret.

In the spirit of inclusion, youth, minorities, and people with disabilities who are not elected as delegates or alternates may apply to be “add-on” delegates.

For more information on the caucus or the committee please contact Michael Sulprizio  at msulprizio@comcast.net / 617-438-0952.

“We need leaders in the State Senate who will work to ensure that everyone has a voice in government and has access to critical services that can help them and their families get ahead; Diana Hwang is one of those leaders,” said Senator Forry.  “For 10 years she has worked the halls of power -- from the State House, to City Hall, to major boards and commissions -- to change government to include those who are often left behind. I couldn't be more proud to endorse Diana Hwang for State Senate.”

“Like me, Diana is the child of immigrants who came to this country to build a better life and ensure that their children had opportunities that they didn't have growing up,” Forry continued.  They struggled as many immigrants do – and that experience shaped Diana's core values, her passion, her commitment and connects her to the struggles so many in our communities face. Diana has been and will be a fearless advocate for women, immigrants and working families.  She is exactly the kind of leader that can bridge the communities of the First Suffolk and Middlesex district and will hit the ground running.”

Forry, the State Senator from the neighboring First Suffolk District, has served in the state legislature since 2005 and has been a trail-blazer in Massachusetts, breaking political barriers and building bridges across many of Boston’s diverse communities.

“I couldn’t be more honored to be endorsed by Senator Linda Dorcena Forry,” Hwang declared.  “Senator Forry has been a great mentor to me and so many other women in our state and her passion for serving on behalf of the people of the Commonwealth is unmatched.  Her leadership on issues like immigrants’ rights, neighborhood development and vitality as well as constituent services are all critical to this district.  Her ability to build relationships and work collaboratively has been an inspiration to me.”

The daughter of Taiwanese immigrants, Diana Hwang is the founder of the Asian-American Women’s Political Initiative – the country’s first political leadership organization for young Asian-American women.  She previously served as a legislative aide in the State House and a Chief of Staff in the Boston City Council.  Diana serves as Board member of the UMass Center for Women in Politics, served as co-chair of the Boston Women’s Fund and is a founding member of Mayor Walsh’s Women’s Commission.  Diana currently lives in East Boston and previously lived in Revere. 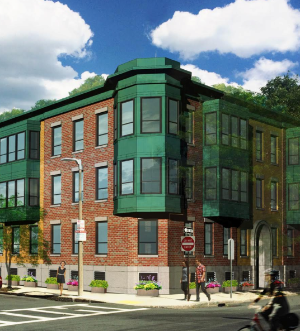 The proposed project at 202 Maverick Street is a 22,700 gross square foot, 3 story-plus penthouse structure with 23 residential units and 20 parking spaces on 8,050 square feet of land.

“I’m running for State Senate because a district as diverse as ours needs someone who understands its needs and fights for every community and constituency,” said Hwang.  “As the daughter of immigrants, my story is the story of this district. I’ve  worked for my entire career within the system to change the system and I know first-hand the power government has to improve our lives.”

Ileana Cintron, an East Boston activist and member of the Massachusetts Democratic State Committee, has endorsed Diana Hwang in this race.

"I'm excited and honored to support Diana’s campaign and lifelong mission of increasing access to government and giving voice to those who don't feel heard or represented,” said Cintron, “Diana has built relationships and has the know-how and political savvy to solve problems and get things done.  She will make a strong Senator and bring a new energy and voice for the people of this district.”

Diana also announced today that her campaign raised over $50,000 in the last two weeks of 2015, an unusually strong showing for a first-time candidate.

“Diana is one of our  brightest and most committed young progressive leaders. She has almost 10 years’ experience advocating for women, immigrants, and working families and has done so across three very different sectors: state government, city government, and non-profits. And Diana has already shown her commitment to running a strong campaign by raising more than $50,000 during the last two weeks of December. She will have the resources needed to win an incredibly short special election,” said Former Massachusetts State Treasurer Steve Grossman, who will serve on Hwang’s finance committee.

Diana began her career as the sole staff member to the late State Representative Debbie Blumer where she drafted and guided key legislative proposals on immigrants’ rights and affordable health care. After Rep. Blumer’s untimely death, Diana served as Executive Director for the Massachusetts Caucus of Women Legislators, where she promoted legislation on critical issues to women and families such as healthcare, domestic violence and public education.

In 2008, seeing the lack of opportunities for Asian-American women in politics, Diana created the Asian-American Women’s Political Initiative (AAWPI). It was the country’s first leadership initiative specifically focused on getting Asian-American women into politics. Over the last 6 years, nearly 50 young women completed a State House fellowship and mentoring program. Most have gone on to work on political campaigns, in legislative offices, or in other politically active roles.

The daughter of Taiwanese immigrants, Diana Hwang has also previously served as chief-of-staff to an At-Large Boston City Councilor.  Outside of work, Diana has been a leading advocate for women in Massachusetts, serving as Board member of the Center for Women in Politics (UMass); as co-chair of the Boston Women’s Fund; and as a founding commissioner for Mayor Marty Walsh’s Women’s Commission.  Diana currently lives in East Boston’s Orient Heights neighborhood and previously lived in Revere.

State Senator Anthony Petruccelli announced last month that he would be leaving the State Senate to take a new job, setting up a special election on May 10.  The Democratic primary will be held on Tuesday April 12.  Massachusetts’ First Suffolk and Middlesex state senate district includes Revere, Winthrop and parts of Cambridge and Boston, including East Boston, Beacon Hill, North End, Chinatown, Bay Village, West End and Waterfront. 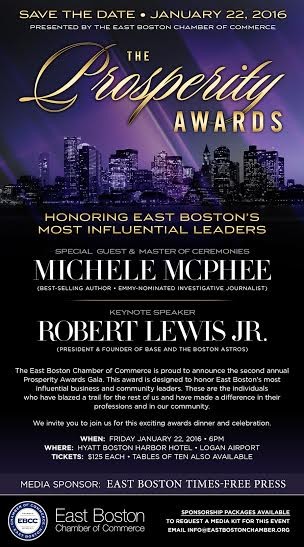 The individuals receiving this year’s award are among those who have made significant contributions to the economic and cultural prosperity of East Boston.

This year's distinguished honorees include*: