Long awaited Logan Study based on 6,000 individual interviews to be released in Winthrop on Wed., May 28

The Department of Public Health will hold a public meeting to release the findings of the Logan Airport Health Study (also known as the Logan Study). The Logan Study involved interviews with more than 6,000 adults living within a 5-mile radius of the airport evaluating potential health impacts of air pollution and noise on residents in 17 communities within the study area.

Associate Commissioner Suzanne K. Condon and staff will review methodology used in the study and findings.  The study will be available on the Department’s website following the meeting.

Storytime for kids at Maverick MarketPlace: May 30 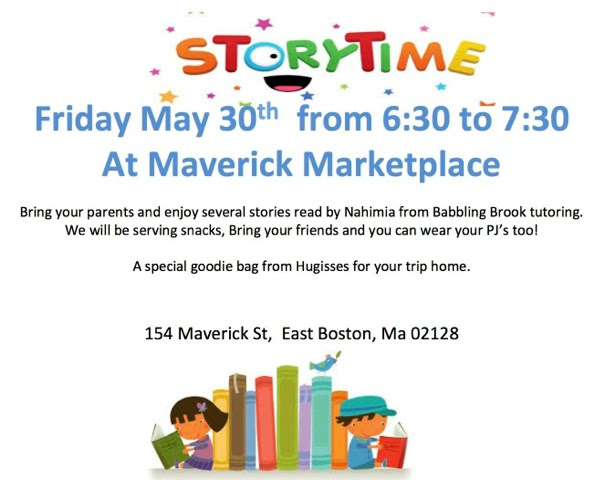 East Boston News: DiCara to discuss his book on June 9

He's a smart guy even though he may be right a little more than half the time!
East Boston News: DiCara to discuss his book on June 9 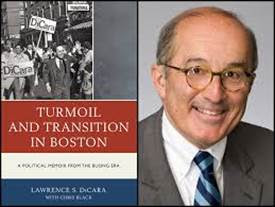 The next Planning & Zoning meeting for the Jeffries Point Neighborhood Association will be held Wednesday May 21st at 7PM at the Yacht Club, at the end of Sumner Street.
Agenda:
Please note some of these projects will be coming for votes before the JPNA in the next several months. In order to vote you need to be a resident of Jeffries Point and attend the voting meeting and one meeting in the previous three months.
Posted by Frank Conte at 7:07 PM 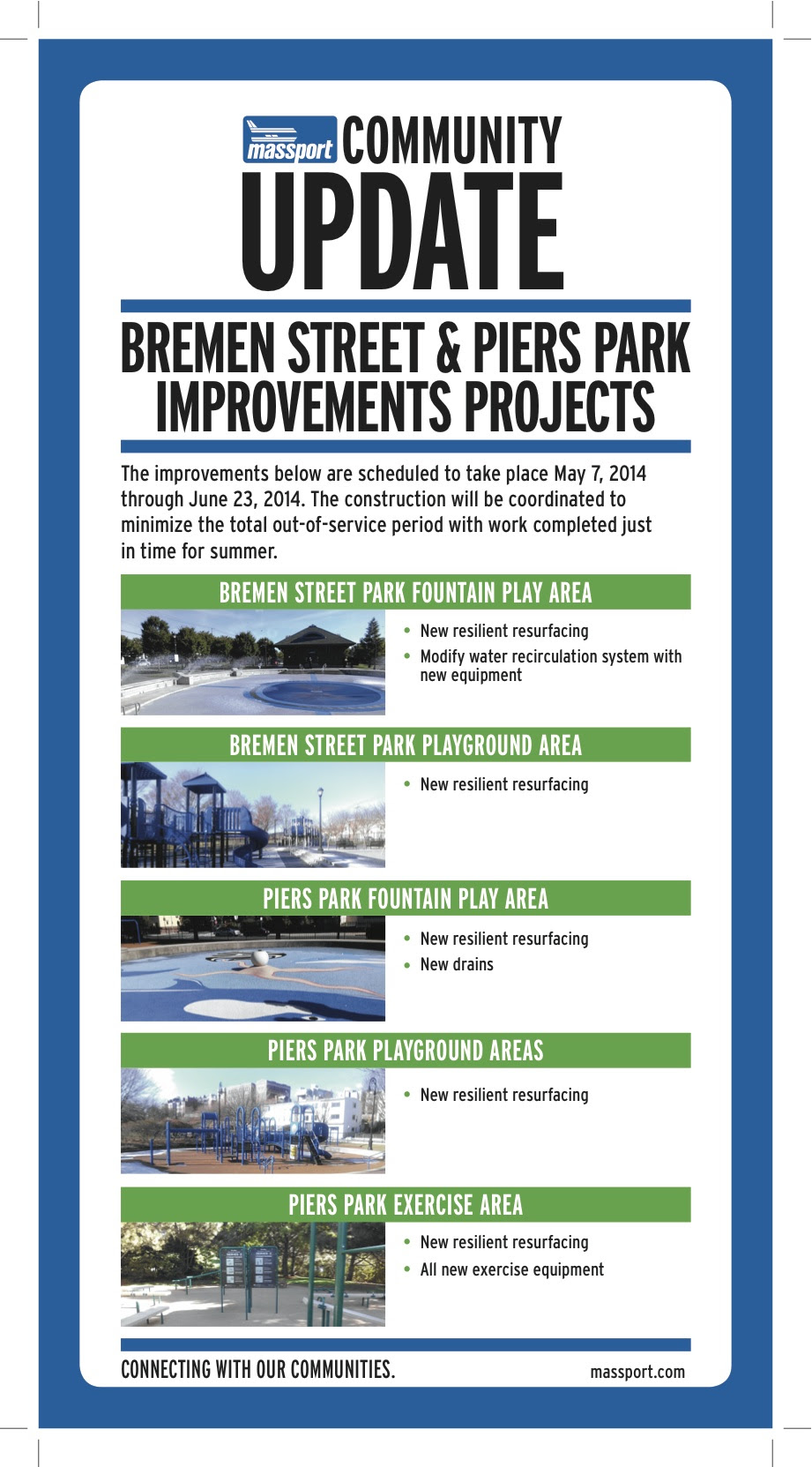 Boston Clergy to Mayor Walsh: ‘Protect the Vote of the People’


Following weekend reports that Mayor Marty Walsh may be in direct negotiations with Mohegan Sun regarding a proposed casino at Suffolk Downs, more than forty Boston-area clergy are urging Mayor Walsh to uphold the “no casino” vote that took place in East Boston on Nov. 5, 2013.

In a joint letter signed by Protestant, Catholic, Jewish and Muslim leaders and submitted to the mayor’s office today, the clergy expressed alarm at the ongoing “affront to the democratic process” amid efforts to approve up to one casino in Eastern Massachusetts, and called on Mayor Walsh to “use the full resources of the city of Boston to protect the vote of the people.”

The letter articulates the legal terms of the Nov. 5 vote, which included the residents of East Boston being legally entrusted with the city’s vote by the Boston City Council, as well as being constantly assured that the Suffolk Downs casino proposal required a “yes” vote in both Boston and Revere to proceed.

“The people of East Boston voted against that proposal,” the letter continues. “Despite this vote and in direct opposition to the will of the people, the Massachusetts Gaming Commission allowed a proposal to go forward at Suffolk Downs.”

While there has been solidarity around this issue among East Boston ministers since November, critical to the present initiative is the increasing involvement of clergy throughout Boston as a whole.  The additional support from ministers across the city is directly attributable to the ignoring of East Boston’s vote by the Massachusetts Gaming Commission, local elected officials, and now perhaps Mayor Walsh, says Rev. Dr. David Searles of Central Assembly of God Church in East Boston, who assisted in writing the letter.

“There were two significant questions on the November 5 ballot, the mayoral election question and the casino question,” Searles says. “If the casino vote did not count, then why should the mayor’s vote count?  There’s simply no logic to this.”

The clergy insist their initiative is not simply about being against a casino, adding that they “support business development and job creation that produces long-term economic health.”  Even still, the letter states, “a casino’s long-term negative impacts would far outweigh the promises.”

Reports that the city may be open to negotiating with Mohegan Sun and Suffolk Downs have increased the clergy’s resolve. “We’re not giving up and we’re not going away,” says Trent Sheppard, Alpha New England’s Collegiate Chaplain and an East Boston resident.  “East Boston’s future is bright, and that future – according to the will of the people – is casino-free.”

The ministers’ letter can be read in full at www.friendsofeastboston.com and clergy signature gathering will continue unabated throughout the week.

We appreciate your vision to strengthen local neighborhoods and to work toward unity that we may be One Boston. As clergy in Boston we share your commitment to the city and the desire for all people to have an opportunity to live peaceful and fruitful lives.

In September 2013 the Boston City Council entrusted the residents of East Boston to represent the entire city of Boston in a vote on a casino proposal at Suffolk Downs. The Suffolk Downs property, located in two host communities (East Boston and Revere), required a “Yes” vote in both communities to proceed.

It was clear this was never about two different proposals in East Boston or Revere, but always about one proposal at Suffolk Downs.

On November 5, 2013, the people of East Boston voted against that proposal. Despite this vote and in direct opposition to the will of the people, the Massachusetts Gaming Commission allowed a proposal to go forward at Suffolk Downs in December 2013.

We are deeply concerned by this affront to the democratic process and we stand in solidarity with the East Boston vote. We appreciate your efforts to support the November 5 vote against a casino at Suffolk Downs and we call upon you to continue to use the full resources of the city of Boston to protect the vote of the people who clearly said "No" to a casino.

We support business development and job creation that produces long-term economic health in the city. While the possibility of new jobs from the Suffolk Downs proposal is alluring at first glance, a casino’s long-term negative impacts far outweigh the promises.

A significant increase in crime rates, the doubling of gambling addictions, and the transfer of revenue from the local economy into casino coffers would harm individuals and families, and would negatively impact local businesses by effectively eliminating 1-2 jobs for every slot machine – and there will be approximately 4,000 slot machines installed at the proposed casino. These impacts would not only be felt in East Boston, but in every neighborhood throughout the city.
We join together with you to support the vitality of our neighborhoods, the unity of Boston, and Boston’s vote for a casino free community.

BOSTON – Today Mayor Martin J. Walsh announced the formation of a Universal  Pre-Kindergarten Advisory Committee to recommend a city-wide strategic framework and action plan to double the enrollment of four-year-olds in high quality, full-day pre-kindergarten programs by 2018. Access to full-day pre-kindergarten with a certified teacher in a Boston Public School or in a community-based program is part of the city’s multi-year effort to improve the achievement of all Boston students and close the achievement gap by grade three.

“Pre-kindergarten programs ensure that all students start kindergarten ready to learn,” said Mayor Walsh. “Rather than spend time on remediation in education, we are investing in our youngest students to lay the groundwork for their long-term success and the long-term prosperity of Boston.”

To create the framework and action plan for the expansion of full-day pre-kindergarten programs, the Universal Pre-Kindergarten Advisory Committee will look at many factors including class space requirements, teacher qualifications, funding requirements, and potential partnerships for before school, after school, and summer wrap-around services.

Thrive in 5, a partnership between the Mayor's Office and the United Way of Massachusetts Bay and Merrimack Valley, and other community partners will conduct a series of stakeholder focus groups across Boston, and offer online surveys to gather input about the strengths and needs of all of the City’s neighborhoods for high-quality pre-kindergarten. The Advisory Committee will make its recommendations for a mixed delivery system to Major Walsh in November 2014.

There are approximately 6,000 four-year-olds living in Boston, and the population of four-year-olds is projected to grow to as many as 8,000 by 2030. Currently, approximately one-third of all four-year-olds (2,200) are in the nationally-recognized Boston Public School Pre-Kindergarten (K1) Program, while others attend community-based private programs.

An estimated 25 percent of all Boston four-year-olds do not attend a pre-kindergarten program. Mayor Walsh’s FY15 budget adds over 100 K1 seats for four-year-olds.

Research on early childhood programs with trained teachers and smaller teacher to student  ratios have been shown to yield benefits in increased MCAS performance, academic achievement, improved behavior, prevention of delinquency and crime, and labor market success. Boston’s K1 program has demonstrated significant gains for all students in their language, literacy and mathematics development, and reduces the achievement gap significantly between students by third grade.

East Boston Shines: Community Clean Up, Saturday, May 10th at 9:00am

Brooms, gloves, and T-shirts will be provided.

EBMS is a non-profit corporation. Our mission is to create a more vibrant business district by initiating private and public improvements, promoting commerce, and supporting efforts to improve the quality of life for all who live, work and do business in East Boston.

Source: EBMS
Posted by Frank Conte at 5:09 AM

(Chelsea, MA - May 1, 2014) The Chelsea Creek Action Group has engaged residents from Chelsea, East Boston, Revere and other municipalities in a campaign about the danger of transporting large quantities of ethanol by rail for almost three years.  The Chelsea Creek Action Group applauds Speaker DeLeo and the co-sponsors of Amendment 392 to the House Budget 4000 for uplifting the public safety hazards of mile-long ethanol trains traveling through densely populated areas.
The Chelsea Creek Action Group is proud to stand with Speaker DeLeo and State Representatives Provost of Somerville, Vincent of Revere, Ryan of Chelsea, Basile of Boston, Toomey of Cambridge, Hecht of Watertown, Sannicandro of Ashland, Atkins of Concord, Keefe of Worcester, Khan of Newton, Rogers of Cambridge, Livingstone of Boston, Brodeur of Melrose, Matewsky of Everett, Farley-Bouvier of Pittsfield, Decker of Cambridge, Walsh of Framingham, Garballey of Arlington and Honan of Boston to urge the Commonwealth’s agencies to work with federal and local counterparts to develop an ethanol transport response plan and temporarily prevent ethanol trains from traveling to the Greater Boston area.
The Chelsea Creek Action Group (CCAG) is no stranger to getting legislation passed.  With strong support from our elected officials, CCAG was responsible for getting a law passed in August 2012 that required the Department of Transportation to commission a study to determine the impact on the public safety of transporting ethanol by train through Boston, Cambridge, Chelsea, Everett, Revere, and Somerville.
The study detailed 31 ethanol train accidents throughout the United States between 2008 and 2012 and concluded that there is an insufficient amount of alcohol-resistant foam, equipment, and training for adequate response to an ethanol incident in Greater Boston.
Since the Department of Transportation’s study on ethanol transport by rail, there have been 7 additional ethanol rail accidents throughout the United States in 2013, and an additional 12 rail accidents involving other hazardous material that required evacuation of surrounding neighborhoods throughout North America.  The risk of a horrific rail accident, like the derailment that happened in Lac-Mégantic, Quebec resulting in 47 deaths, is a public safety burden that cannot be mitigated.  The ethanol amendment was passed on April 30, 2014, the same day that the derailment of a train carrying crude oil in Lynchburg, Virginia caused extensive flames and generated an evacuation for nearby residents and workers.
Residents of Chelsea, East Boston, and Revere have long recognized the need for agency attention on hazardous material rail transport.  CCAG agrees with National Transportation Safety Board Chairperson Deborah Hersman that the Obama administration needs to take steps immediately to protect the public from potentially catastrophic train accidents even if it means using emergency authority.

CCAG and our allies will continue to work to stop the transport of ethanol by rail in densely populated communities.  The Chelsea Creek Action Group urges the Massachusetts Senate to pass a similar bill to the House budget amendment that requires: (1) a lengthy moratorium preventing the Department of Environmental Protection from issuing a chapter 91 license to oil facilities unless they receive ethanol by marine vessel and (2) the Massachusetts Emergency Management Agency completion of an ethanol transport response plan.  The Senate vote on the budget is expected to happen by the end of May 2014.